CheapASPNETHostingReview.com | Best and cheap ASP.NET Core 1.0 hosting. When errors occur in your ASP.NET Core app, you can handle them in a variety of ways, as described in this article.

To configure an app to display a page that shows detailed information about exceptions, install the Microsoft.AspNetCore.Diagnostics NuGet package and add a line to the Configure method in the Startup class:

Put UseDeveloperExceptionPage before any middleware you want to catch exceptions in, such as app.UseMvc.

Enable the developer exception page only when the app is running in the Development environment. You don’t want to share detailed exception information publicly when the app runs in production

To see the developer exception page, run the sample application with the environment set to Development, and add ?throw=true to the base URL of the app. The page includes several tabs with information about the exception and the request. The first tab includes a stack trace. 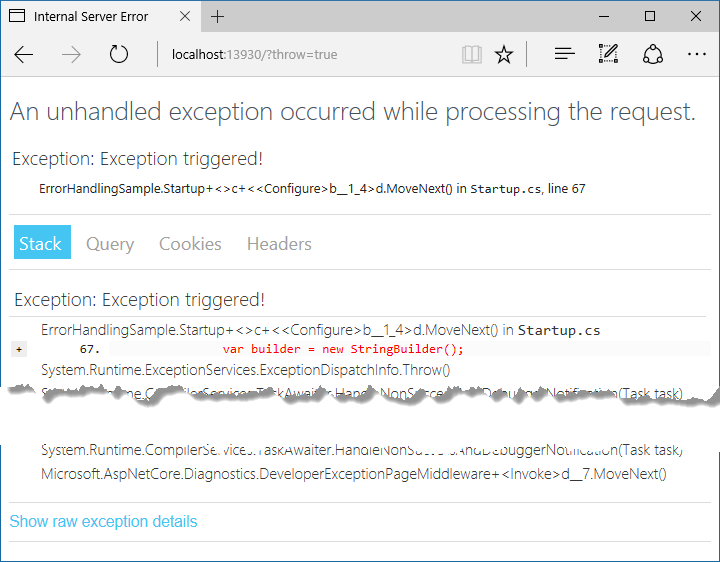 The next tab shows the query string parameters, if any. 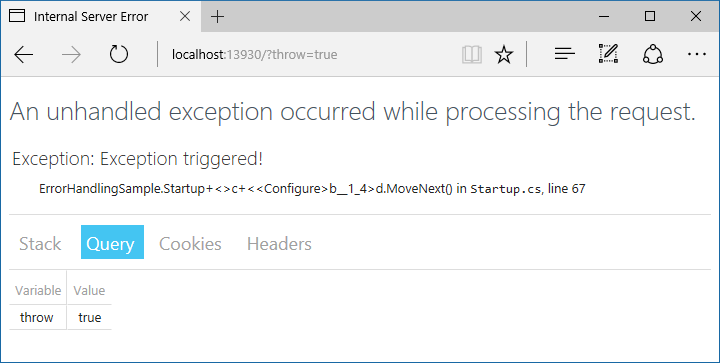 This request didn’t have any cookies, but if it did, they would appear on the Cookies tab. You can see the headers that were passed in the last tab. 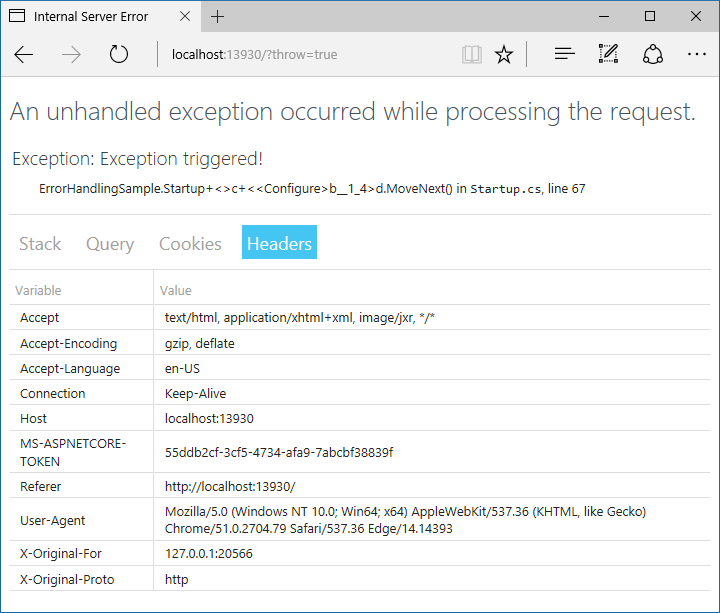 It’s a good idea to configure an exception handler page to use when the app is not running in the Development environment.

In an MVC app, don’t explicitly decorate the error handler action method with HTTP method attributes, such as HttpGet. Using explicit verbs could prevent some requests from reaching the method.

By default, your app will not provide a rich status code page for HTTP status codes such as 500 (Internal Server Error) or 404 (Not Found). You can configure the StatusCodePagesMiddleware by adding a line to the Configure method :

By default, this middleware adds simple, text-only handlers for common status codes, such as 404:+

The middleware supports several different extension methods. One takes a lambda expression, another takes a content type and format string.

If you need to disable status code pages for certain requests, you can do so:

Also, be aware that once the headers for a response have been sent, you can’t change the response’s status code, nor can any exception pages or handlers run. The response must be completed or the connection aborted.

Only the hosting layer can handle exceptions that take place during app startup. Exceptions that occur during app startup can impact server behavior. For example, if an exception happens before you call KestrelServerOptions.UseHttps, the hosting layer catches the exception, starts the server, and displays an error page on the non-SSL port. If an exception happens after that line executes, the error page is served over HTTPS instead.

You can configure how the host will behave in response to errors during startup using CaptureStartupErrors and the detailedErrors key.

MVC apps have some additional options for handling errors, such as configuring exception filters and performing model validation.

Exception filters can be configured globally or on a per-controller or per-action basis in an MVC app. These filters handle any unhandled exception that occurs during the execution of a controller action or another filter, and are not called otherwise. Learn more about exception filters in

Exception filters are good for trapping exceptions that occur within MVC actions, but they’re not as flexible as error handling middleware. Prefer middleware for the general case, and use filters only where you need to do error handling differently based on which MVC action was chosen.

Model validation occurs prior to each controller action being invoked, and it is the action method’s responsibility to inspect ModelState.IsValid and react appropriately.

Some apps will choose to follow a standard convention for dealing with model validation errors, in which case a filter may be an appropriate place to implement such a policy. You should test how your actions behave with invalid model states.